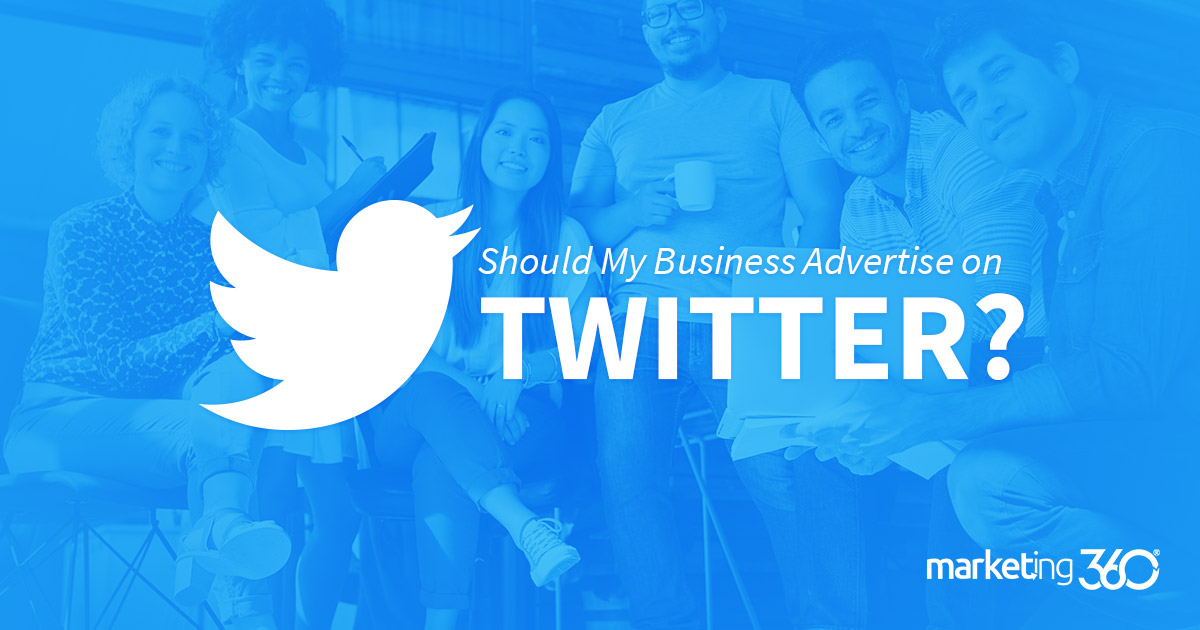 Twitter offers another online platform for advertisers to reach potential customers.  This overview will help you decide if Twitter is right for your business.

Just a few years ago, social media platforms like Facebook and Twitter were largely blown off by advertising analysts.  They were cute and fun but held minimal value for targeting commercial intent or gaining customer insight.

What a difference a few years makes.

As of this writing in 2017, Twitter is joining Facebook and other social media platforms as strategic and tactical bedrocks, built on a deep foundation of social and consumer data.  Simply put, you’ve never had an advertising platform that let you target your audience with such detail.

This is a result of how social media is able to track behavior.  Twitter doesn’t charge a fee to users, but it levies a transaction nonetheless.  In exchange for being able to share your opinions with the world and keep up with what Ashton Kutcher ate for breakfast, you allow Twitter to track everything you do.

But that’s not all.  Unbeknownst to most people, Twitter partners with consumer data brokers like Acxiom and Datalogix.  These companies track the spending history of hundreds of millions of people, with an average of 1500 data points per person.

So Twitter knows far more than that you retweet Donald Trump.  Do you vacation in Vegas every winter?  Are you expecting a child?  Do you take medication for high cholesterol?  Do you attend classic rock concerts?  Twitter probably knows.

But even with all this data, Twitter remains a social media platform.  People are not there to shop.  They want to know what’s happening in the world right now.

This means you need to set goals and create a strategy that speaks Twitter’s language.  This tends to work best with awareness campaigns that target people early in the buying cycle.  Then you get them in your funnel so you can eventually win the business.

Here are some tips, ideas, and strategies to help you get started.  Twitter campaigns are not usually expensive, so with the right plan, you can get great marketing ROI.

The first consideration you want to factor is whether or not your audience tends to be active on Twitter.  Not everyone is.

In general, Twitter users tend to be younger and have a higher income. According to Pew Research, 36% of 18-29 year-olds use Twitter, while only 10% of people 65 and older use it.

Gender and region (urban vs rural) tend to be pretty even: 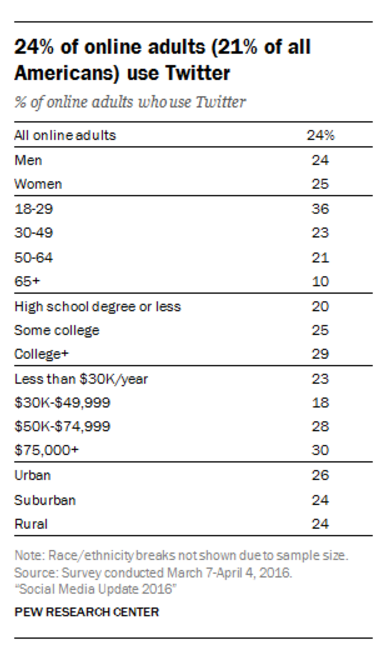 Twitter users also tend to be tech savvy and mobile users.  College grads ages 18-29 who make more than 75k a year and update their social on their phones are the prime targets.

You can target people who’ve already interacted with your brand, such as people who’ve downloaded an app or visited your website.  You can download an email list, and not only target those people, but also create a lookalike audience that targets people with similar interests.

When you go onto Twitter Ads it lets you drill down to specific interests.  Say, for example, you’re introducing a new brand of Cajun seasoning.  You can select that target audience: 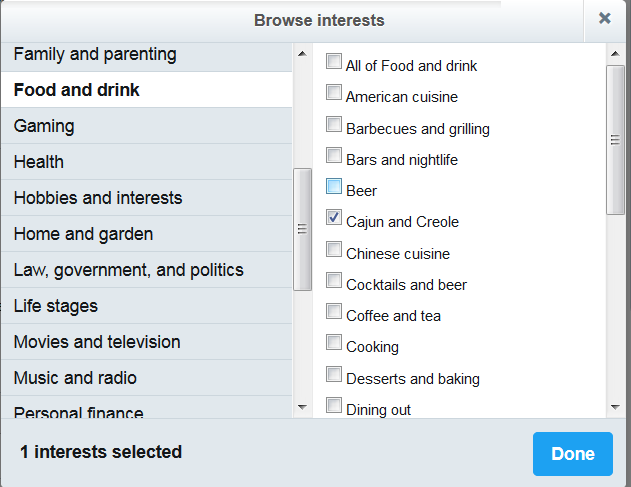 Then add a behavior filter.  In this case, I can choose to target people who are likely to eat at Popeye’s restaurants: 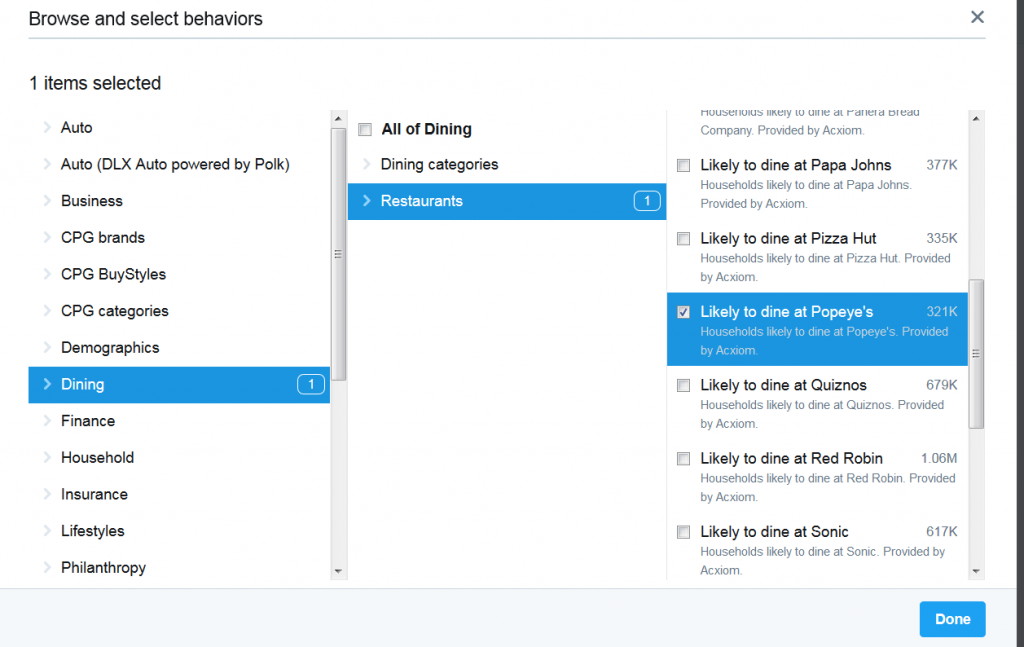 I can also filter for people who have searched for certain terms on Twitter, such as “cajun food” or “shrimp recipes”.

If I want, I can add people who watch Cajun Chef Emeril Lagasse cooking shows or like NCIS New Orleans.

Then, Twitter gives me an audience summary with a range of people I’m likely to reach:

You can test these audiences to find the range of people that seem to perform the best for your product or offer.

It’s important that you target the behavior you want people to take by using objective-based campaigns.  Here is an overview:

A promoted post improves the rank of your tweet in the target audience’s feed, giving it an exposure boost.  You set budgets based on the action people take.

Use promoted posts to get more tweet engagement by targeting the first action (reply, retweet, like) someone takes.

Twitter ads are excellent for creating brand awareness.  Create a target audience then pay either by the followers you gain or per 1000 impressions.

If you have a video you want to promote, you only pay when that video is viewed.

Create campaigns that take people to a landing page on your website, or setup campaigns where you pay only when the visitor converts on your site.

Lead generation campaigns work well to build out your email and retargeting lists.

The kind of campaign you choose is based on your business goals.  Make sure you’re clear so your efforts will be effective.

Be aware that tracking ROI on awareness campaigns can be tricky.  Growing your Twitter audience and even driving traffic to your website may not have an immediate impact on sales.  But you do create a bias towards your brand as you gain exposure on Twitter and retarget people across the internet.

Much of the end value you derive is when that bias affects the final buying decision.  People favor brands they are familiar with.  Twitter helps you gain that competitive edge.

Twitter is basically a form of native advertising.  That means while promoted tweets are identified as such, they otherwise look like other organic tweets.

And as we said, Twitter users are not really there to consume advertising material.  So when you do the creatives and copy for your Tweets, you want them to be interesting and engaging of their own accord.  Anything that seems spammy or too salesy won’t do well on Twitter.  Progressive gets it: 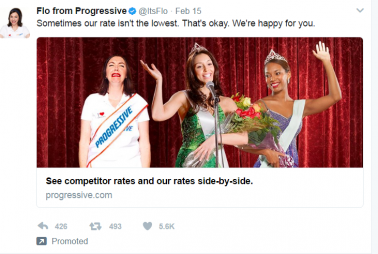 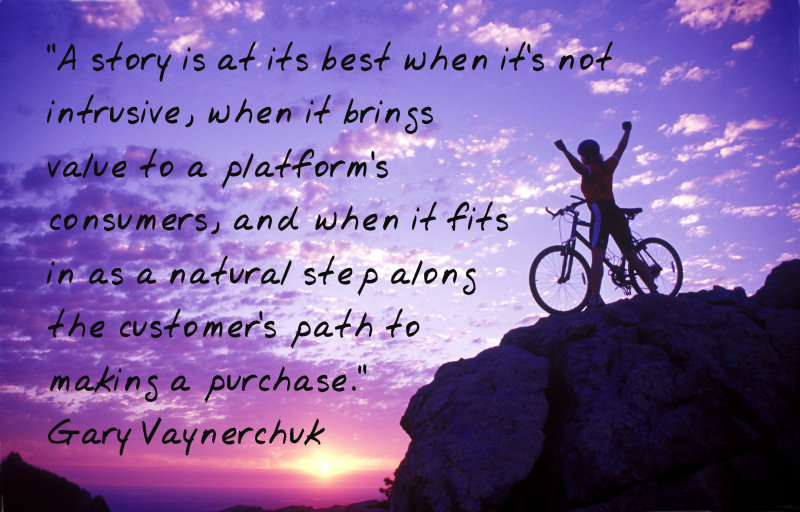 Here some advice for when you are leaning towards direct-response with your Twitter ads:

Here are more interesting facts to consider about Twitter advertising:

72% of brand followers are likely to buy in the future.  84% of followers who interact with a brand share positive experiences.

This is the primary target of your Twitter ads.  Grow your audience, build trust and familiarity.  Let your fans help spread your content.

With the enormous engagement on a platform like Twitter, the potential advertising payoff is worth the effort.