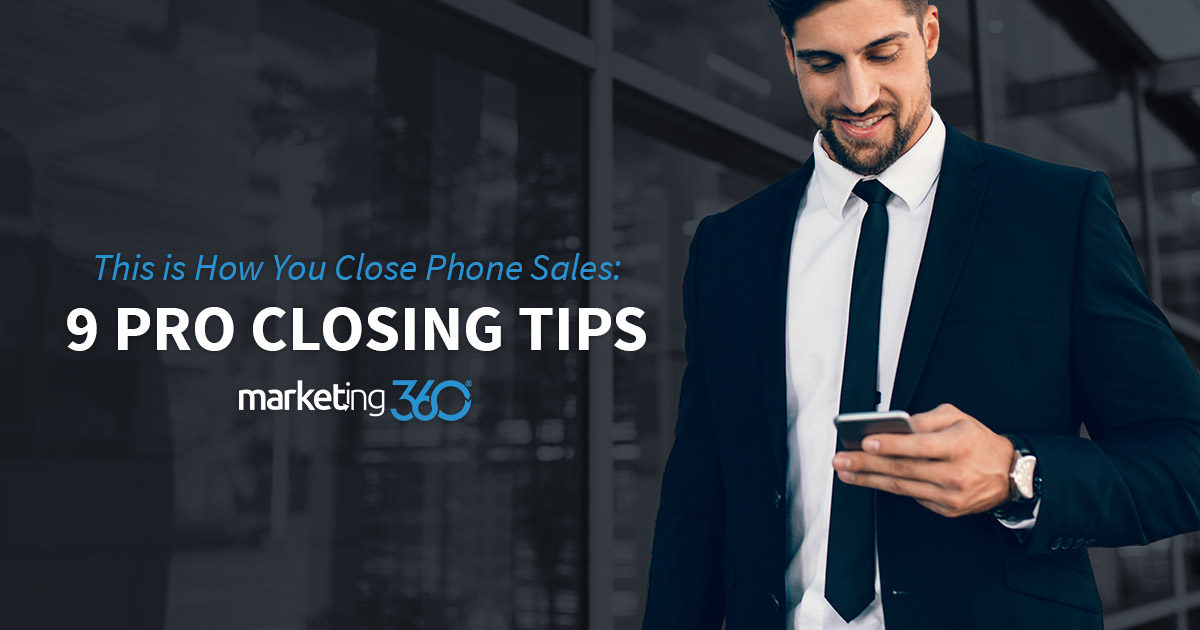 At Marketing 360®, we help our clients use inbound marketing to generate leads.  But those leads still need to be closed, often over the phone.  Here are 9 tips on how to close more sales over the phone, starting with advice from seasoned sales pros.

This always throws novice salespeople off, because they’re certain they need to outline everything about the features and benefits of their solution.  The worst salespeople will go on tirades that are several minutes long.

Several minutes is an eternity to listen to someone on the phone.  As you pontificate – thinking you’re killing it – you don’t see the person on the other side of the phone drowning in details.

This is the analogy Joe Kellogg (JB’s Dad) uses.  Imagine that as you talk, you’re holding the lead’s head underwater.  If you talk long enough that they start to drown, you’ll lose the deal.  Expect that the average person can hold their breath for about 30 seconds.

If you find yourself starting to blather on, picture that lead in your mind, their face twisted in anguished desperation as they drown in a muddle of words (Of course they don’t literally drown.  They get bored and stop listening to you.).

Before that happens, pause and ask them a question.  Shift the conversation to them.  As you listen, they’ll start to tell you how they feel.  Those emotional triggers – rather than the detailed features of your offer – are what will motivate them to act.

Even if they drone on about how their overbearing mother ruined their childhood.  Even if they insist on outlining every detail about why they got into business and the challenges they overcame.

Even if they just want to bitch.

Salespeople who interrupt are more than just rude.  They’re ineffective.

You’ll have to fight the urge to interrupt.  As the prospect speaks, an idea about how your solution would be perfect will pop into your head.  You’re dying to blurt it out.

But wait, keep listening and taking written notes of what the prospect says.  Then, when they are done, start to make a connection between the problems they’ve now expressed to you and how your solution will solve them.

You might be starting to notice a theme here.  Effective phone closers know how to gain the perspective of the prospect, then tie their solution into a problem the prospects really cares about.

Keep the conversation focused on the prospect.  You close deals when they understand how you can solve their problem, not by bulldozing them with details about how great you think you are.

When you listen without interruption and focus the conversation on the prospect’s needs, you’ll gain insight into their perspective.  You’ll build rapport.  Better results will follow.

Make this assumption:  The person you’re calling is busy.

They don’t know you.  They don’t want to chit-chat.  A bubbly “How’s it going today?” is just annoying.  Who wants to answer that question on a sales call?

But there’s an even worse opening.  The apology.  I know you’re busy and I’m sorry to interrupt you is the weakest sales call opening in the universe.  It’s a huge red light that you’re not confident – that you don’t think this call will be worth their time.  Forget about closing that deal.

If you’re cold calling, you’ll need to hit them with a powerful benefits statement that gets their attention.  A landscaper recently cold called me and started with “We’re offering 50% off on a month’s worth of lawn mowing services with no contract, would you like to get on our schedule?”  Right to the point.

If you’re responding to a lead’s inquiry, quickly orient them about the reason for your call then let them start talking about why they reached out to you.

Later, when you’ve established rapport, you can talk about sports, the weather, and “how they are.”  Strong openers are strong closers.

One sure fire way to lose a deal on a phone call is to hesitate when asked about price.

There is a trick here.  You want to the lead to understand the value of your services before you discuss price.

This is a huge reason that it’s important to guide the conversation by asking questions and letting the prospect do the talking.

When you ask questions and listen, you’re in control.  You’re the Oprah of the conversation.

If you do all the talking and the prospect asks the questions, it won’t be long before they ask How much does this cost?

If you haven’t made them understand how they’ll benefit from what you do, price is a nonstarter.  It will seem like too much and you’ll lose them.

If you have them thinking you’re the solution for them and they see the value in what you do, then price won’t be an issue.  Give them an accurate quote without hesitation.

Most consumers today expect transparency with prices.  Just make sure they understand the indispensable value they get for their dime before you get into pricing details.

If you are new to sales, you’ll learn a harsh lesson early.

Leads lie to you.

They tell you they love you and really want to work with you.  As soon as they put together a little money or talk to their wife about it they’ll sign up.  They want to get started next Monday.

You celebrate!  Nicely closed!  What a relief, now your numbers look good and the pressure is off.

One of the least painful ways for a lead to get rid of a salesperson is to agree with them, promise to work with them, then pull a vanishing act.

The deal is only done when they sign on the line which is dotted.  Never assume a close.  It’s a rookie mistake.

You can avoid the problem of lying leads by being assertive about closing.  Lead the prospect by scheduling the close and holding them to it.  Be prepared to quickly address any objections they bring up so you can avoid delays.

Don’t make people feel like they’ve been sold.  Instead, maintain enthusiasm about how much they’ll love your offer so they’re looking forward to buying.

Build momentum to the closing date.  If you’ve made a compelling case for your solution, they’ll be ready to close.  If not, objections will creep in you’ll need to handle quickly.

Phone Sales Tip #8:  Have a Goal for Every Call

If you work on a sales team, you may have call numbers to meet.  Smile and dial.

Even if you’re making a hundred plus dials a day, go into each call with a goal.  One piece of information to share, one important question to ask, one more level of your pitch you want to make.

If your calls don’t have a purpose, you’ll start to seem like a cold caller – a spammer.  Once that impression is made, you are – to be blunt – screwed.  Nobody wants to do business with pushy salespeople.

But many people respect persistence as long as you’re not wasting their time.  Make each touch count for you and the prospect.

Whether you’re working in a fast-paced sales office or you’re an individual entrepreneur building your business, phone sales is hard work.

This hard work is often emotional labor.  You’re tired, having a crap month, and feel like every lead you’ve gotten was dead from the get-go.

But when you make that next call, you have to act like you care.  In fact, you probably don’t care as much as the prospect, but if they sense that, you won’t close them.

If you go see the Imagine Dragons concert tour, you’d like to believe they’re as excited and engaged as they were on opening night.  And they might be, but if it’s their 61st show they probably aren’t.  What’s important is that the audience can’t tell.

The one thing that will make selling easier – in person or on the phone – is believing in your product.  The first person you need to sell on your solution is yourself.

There is nothing harder than trying to sell something you don’t believe in.  It forces you to fabricate your pitch.  It doesn’t work.

If you believe in what you offer, selling is nothing more than convincing people to do something that will make their lives better.

When you know that’s your goal, you become a great listener, and with hard work, everything else will fall into place.